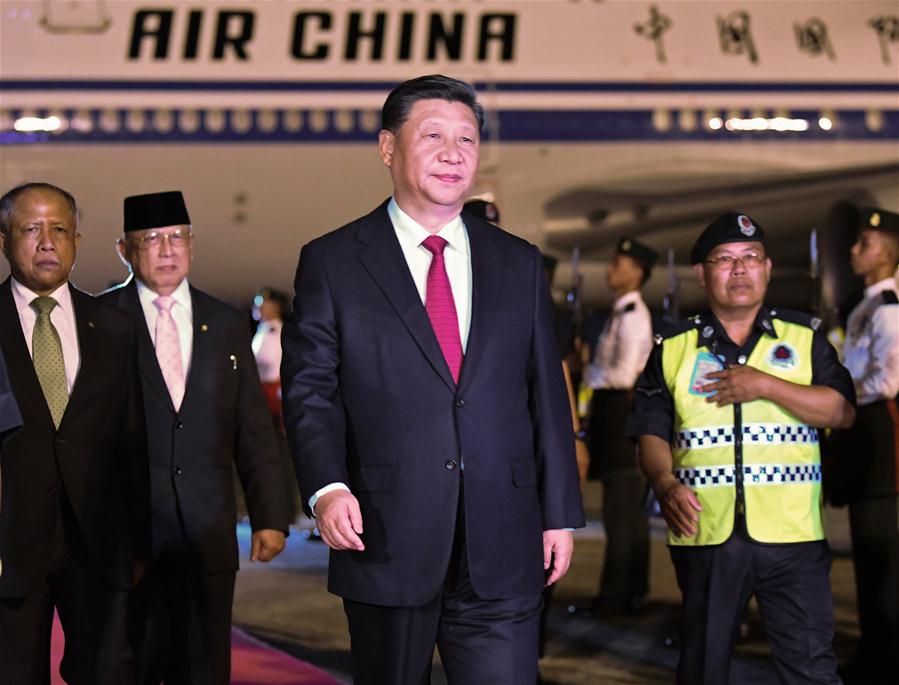 BANDAR SERI BEGAWAN, Nov. 18 (Xinhua) -- Chinese President Xi Jinping arrived here Sunday for a state visit to Brunei, the first by a Chinese head of state in 13 years to the Southeastern Asian country.

Xi was warmly welcomed by senior officials of Brunei at the airport.

Xi stressed that China and Brunei are close neighbors across the sea, and also friends and partners who trust each other, as the two sides have a long history of friendly exchanges.

Since the establishment of diplomatic ties 27 years ago, the two countries have been treating each other as equals, and scored deepening political mutual trust and fruitful results in various cooperations, which brought tangible benefits to the two peoples and made positive contributions to peace and prosperity in the region, said Xi.

He expected to carry forward bilateral traditional friendship, jointly outline a blueprint for the development of bilateral relations in the new era, and uplift the China-Brunei good-neighborly friendship to a new high through the visit.

It is the second stop of Xi's ongoing Asia-Pacific tour. He has paid a state visit to Papua New Guinea, met with leaders from Pacific island countries that have diplomatic ties with China and attended the Asia-Pacific Economic Cooperation Economic Leaders' Meeting in Papua New Guinea's capital city of Port Moresby.

Upon his departure from Port Moresby Sunday afternoon, Papua New Guinea's Deputy Prime Minister Charles Abel with other senior officials saw the Chinese president off at the airport.

After Xi's stay in Brunei, he will fly to the Philippines for a state visit.

Dressmaker Drolma: I only do one thing in my whole life

"As the oldest daughter in my family of five girls, my family has only asked me to do one th...